Incident 16 of 2020 :-
18/07/2020, 15:52, Dow Crag, SD26239759
The weather had cleared following early rain and the day was now bright and very warm. The team was contacted by Cumbria Police at 15:52 regarding a lady who had slipped while walking on the Coniston Fells and had badly sprained her knee and was unable to weight bear.
Discussion between the Team Leaders and the casualty’s partner suggested they were on the summit of Dow Crag, which was confirmed by the use of the Phone Find system.
Team members assembled at base and a hasty crew set off ahead to assess the casualty and get treatment underway.
Given the position of the casualty and the prospect of a very lengthy carry out in full Covid-19 Personal Protective Equipment (PPE) and the consequential welfare issues for the Team members, the Team Leaders enquired regarding the availability of a Coastguard Helicopter.
The Team was grateful that Rescue 199 from Prestwick was tasked to the incident and they were on scene a few minutes after the first Team members arrived.
The casualty was winched into the helicopter for her onward journey to Furness General Hospital in Barrow in Furness for further assessment.
The Team members returned to base and went through Covid disinfectant protocols.
The incident took 3 hrs 15 minutes and involved 16 volunteer members. 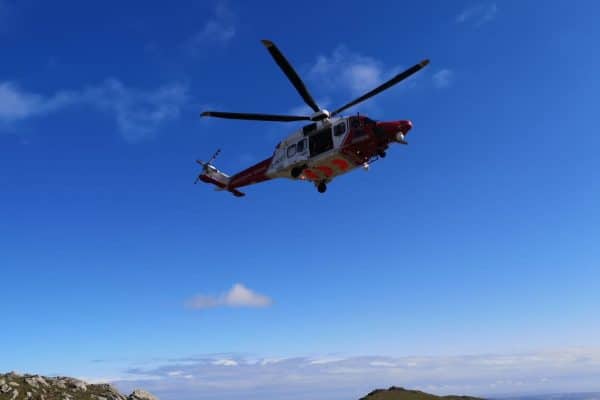