Coniston has been providing this service since 1947, when the main consideration was simple: locate the casualty, package them up and get them off the hill as quickly as possible. But it is not as straight forward nowadays. 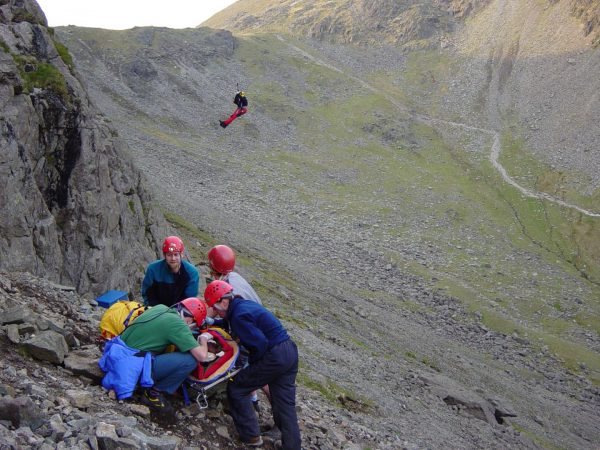 Mountain Rescue has expanded since Coniston first introduced such a concept. Due to pressure from the Government, as well as the natural doctrine born from the increased number of MR teams within the country, the provision of Casualty Care is under constant review. All teams now have to abide by legislation resulting in rules set by MREW (Mountain Rescue England and Wales) which also provides guidelines as to which drugs to use and how (we no longer are allowed to give the casualty a stick to bite on whilst we splint a broken leg!), the best equipment for the varying rescue scenarios, and the organising of the now national Casualty Care Exam (the bane of my life!).

In the early days, very few drugs were carried in the First Aid Sack. As Mountain Rescue developed, lucky casualties would be offered cyclimorph (morphine and cyclizine) for their pain, but little else. Now we have an array of drugs to treat most conditions we may be confronted with, not only in terms of trauma patients and pain relief, but also those suffering from medical conditions such as Asthma, Heart complications, Seizures or Diabetes. We also carry Oxygen and Entonox, the latter being a form of pain relief, otherwise known as laughing gas. And yes, I have had the pleasure of seeing casualties completely forget their pain and become very animated, which makes treating them so much easier. 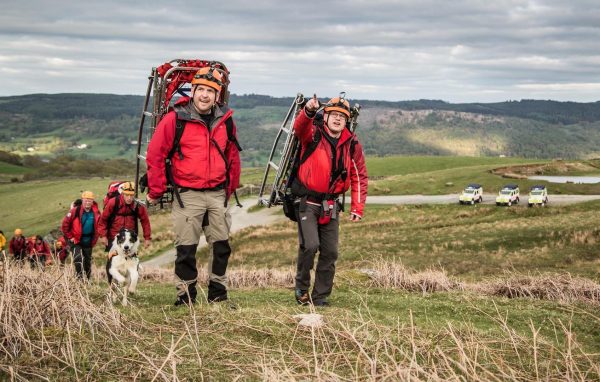 As regards equipment, we have a dedicated First Aid Sack complete with splints to stabilise all vulnerable limbs. Stretchers are now lightweight and consist of two parts, which means two team members are needed to carry one stretcher to the casualty. It actually takes 8 people to carry a loaded stretcher! In addition we always take a Casualty Bag (like a large heavy duty, weatherproof, fleece lined sleeping bag) which lies on the stretcher and in which the person is laid for warmth and comfort during the journey to the Land Rover. The other large piece of equipment is a Vacuum Mattress. This acts as a complete body splint and is therefore a necessity for incidents involving falls from height where serious trauma damage can occur eg. pelvic, femur or spinal injury.

However, also bear in mind that where an incident occurs involving a climber eg, someone falling whilst on Dow Crag, or the person is crag fast (ie. has not the confidence to get themselves off steep or rough terrain they have found themselves on), then we also have to carry rope sacks to the scene.

In order for the Team to meet the required standards now expected of Casualty Carers, regular training and refresher training sessions are held during the course of the year. This becomes more intense as one gets closer to the dreaded Casualty Care Exam which has progressively become more structured over recent years and is now fraught with various medical protocols candidates must have followed. A Team Member has to have passed this exam if they wish to be a recognised Casualty Carer with the authority to administer all drugs, except Oxygen and Entonox. The exam certification lasts for three years after which it has to be renewed. The exam itself is comprised of two parts, a written paper and a scenario based assessment, covering both a trauma and medical condition. Potential Casualty Carers now have to really prove their knowledge of the Syllabus, including the deliverance of that knowledge through skills performed during their appraisal, and the production of a Training and Experience log book which should be completed during the course of the 12 months prior to the exam. 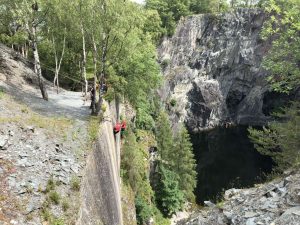 Additionally, now, ALL Team members need to have undergone Basic Life Support Training and First Aid Training. This is a challenging requirement to ensure and fulfil. More recently, Covid-19 protocols and PPE have added further complexity.

One of the merits, however, of Mountain Rescue growth, is the utilisation of helicopters which were not available in the early days. Where a Casualty has suffered a serious or potentially life threatening injury or condition, we can call upon the support of either the Air Ambulance Service or the Search and Rescue Coastguard Helicopter. Equally should the location of any incident dictate a long and rough or difficult stretcher carry, then weather allowing, air assistance can be requested.

I sometimes think Mountain Rescue is forgetting its roots. It was (and still is) a completely voluntary charitable body, initially made up of local people who simply wanted to help those unfortunates who required assistance getting off the hill, whether hurt or lost. You didn’t need, and you weren’t tested, for any particular skills other than your willingness to go to the aid of others any time of the day or night, and in any weather conditions. Simple effective protocols were followed successfully, and then everyone went either back home or back to work, and that was that until the next call out. Now there is legislation, rules and regulations, committees and sub committees, governing everything from how you approach a casualty, to how you hand them over to the paramedics, not to mention your ability to do so! Oh, and of course the treatment in between. (Something I have forgotten is the requirement nowadays to ensure all medical equipment is in date …this includes bandages and plasters!!!). Most teams now have at least one or two members from the medical profession.

So, Casualty Care is complicated. But we are trained to carry out that care within the constraints of our own abilities, and to the standards now required by law and MREW. Coniston MRT safely and successfully fulfils all these requirements with enthusiasm, commitment and selfless dedication.