An incident was received from the North West Ambulance Service (NWAS). It was reported that a man had fallen 50ft and had suffered an injury to his leg which had left the bone exposed.

When incidents are reported such as this with a fall from height, you would expect severe trauma. With the current operating procedures due to the pandemic, calls were made to contact team members and extra medical care to facilitate the rescue.

Attempts were made to contact the casualty party but this was not successful. Due to the reported situation the Team Leader was contacted by the air desk to inform him of the availability of aircraft should they be needed. The Great North Air Ambulance from Langwathby was despatched and the Coastguard were put on standby.

Team members assembled at base and made their way in 2 Land Rovers to Levers Water. It was decided that the 3rd Land Rover would also be despatched as soon as a third team was assembled.

In order to get to Gill Cove we took the path along the west shore of Levers Water which leads to the cove and Levers Hawse.

The casualty was located further down than was expected, where the path crosses the beck which flows from the cove. His injuries were not as traumatic as previously reported so the helicopters were stood down and a Land Ambulance was requested instead.

The gentleman was treated for his injuries by 2 doctors from Langdale and Ambleside MRT (LAMRT) with assistance of one of their casualty carers and our leading casualty carer.

The gentleman was stretchered, with difficulty, to the waiting team vehicles and was transported down the track to rendezvous with an ambulance from NWAS.

All kit used was then put into quarantine and other equipment was sterilised.

This call out involved 9 team members from Coniston MRT and 3 from LAMRT. 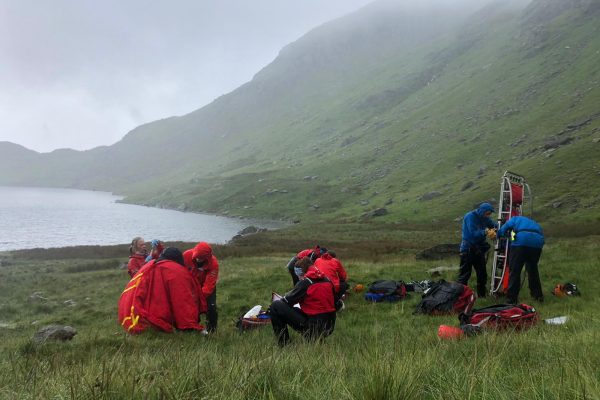