The sky was overcast and heavy rain was forecast for the afternoon.

The team was alerted by the North West Ambulance Service (NWAS) to a male walker having fallen and injuring his ankle. He was unable to continue his walk.

It had been reported by NWAS that the walker was near Levers Hawse just above Levers Water. The team leader for the day contacted the party and was able to ascertain that the casualty was on the path between the Old Man of Coniston summit and Goats Hawse.

A full team call out was initiated and the team made way to the scene. Due to there being low numbers and the prospect of a long carry due to the weather, Duddon and Furness MRT (DFMRT) was alerted to assist with the carry.

The first vehicle made way to Bursting Stone Quarry high up on the Old Man of Coniston where the first five team members made way to the scene with first aid, casualty bag and stretcher.

On the tops the weather was worsening, we were met with strong winds. On arrival with the casualty, who was already in a shelter provided by some passing walkers, we started our treatment. The gentleman had suffered a serious injury to his ankle. He was administered with pain relief while his ankle was splinted.

Once we were ready to evacuate, the casualty was placed on our stretcher and we made our way down off the fell. When we got down to Goats Water we were met by members of DFMRT who helped us with the tricky carry down to the vehicles on the Walna Scar track.

After some time we made our way back to the vehicles and back down to base where the casualty was transferred into the care of paramedics from NWAS. He was taken to Furness General Hospital in Barrow for further treatment.

In total 11 members from CONISTON MRT and 9 members from Duddon and Furness MRT attended this rescue which lasted 4 3/4 Hours. 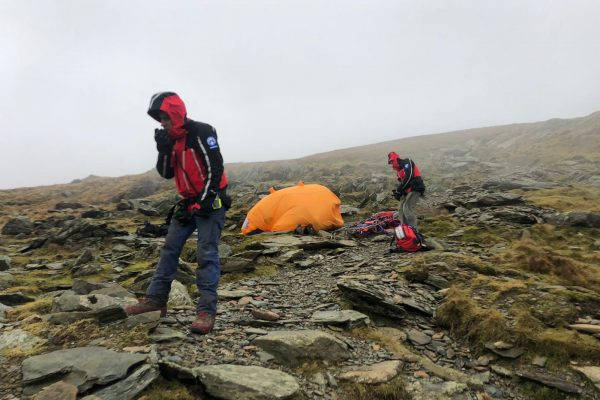