The afternoon was very wet and misty with a stiff breeze blowing on the tops. The Team was alerted at around 15:50 hours by Cumbria Police. A family of four – mother, father and two children, plus their dog had become lost in mist after setting off earlier to complete a circular walk in the Coniston Fells. They were getting cold and wet and they had no means of navigation off the fell.

The Duty Leader was able to pinpoint their position as the informant described it as at a memorial to a Halifax Bomber, which we know is near the summit of Great Carrs. This was confirmed by using our Phone Find Tool via our SARCall logging system, which gives us a pinpoint on our electronic mapping system.

Given that visibility was very poor and unfortunately with no map and compass to help them self rescue, and the possibility of getting into further difficulty with some quite nasty ground in the vicinity, we deployed two land rovers’ worth of personnel. We ascended from Levers Water then went via Swirl Hawse, Prison band and Swirl How. A third vehicle brought up two more team members and Search Dog Bute just in case.

We had told the party to wait where they were and we would be with them in about an hour, in fact the first Team member was with the party exactly 60 minutes from setting off! The Party was easily found and they were very cold and wet, but otherwise all fine. They were given warm jackets and some chocolate and we then retraced our steps back to the vehicle, from where we took them to our base in Coniston and reunited them with their vehicle. Thirteen volunteer members attended and the incident lasted 3hrs 25 mins. 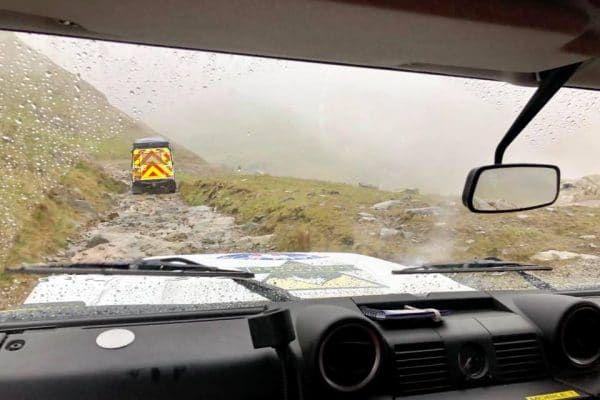