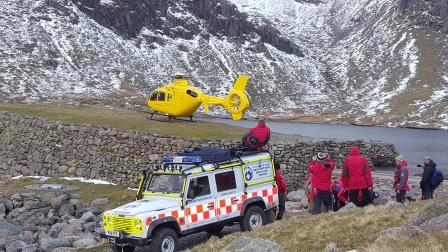 The weather was warm in the sun but quite cool when it went behind a cloud. There was a slight breeze and luckily there was less snow than before.

The team were alerted to an incident just below Swirl Hawse where a woman had slipped and injured her ankle.

A full team call out was instigated and the team made there way up to Levers Water Dam in the 3 team Land Rover Ambulances. The casualty was treated on the scene and her ankle was splinted. She was then helped in to a casualty bag on the stretcher for her downward journey.

An air ambulance was able to land on the dam and take the lady to Furness General at Barrow.

A total of 12 team members attended this rescue which took 2 1/2 hours.