Although the afternoon was dry, sunny and warm, it was cool on the north side of Wetherlam where the rescue took place

We were initially called to attend an incident in the Tilberthwaite/Wetherlam area where a hiker had fallen 30ft. The extent of his injuries were unknown at this point.

One land rover was despatched quickly whilst other team members made their way to the base, after which a second vehicle was deployed. In addition other members also attended after travelling from an external training session out of the area. Since the exact location of the male casualty was unknown, the team  searched different sides of Tilberthwaite Gill. However, we were then informed he was with a walking party on Wetherlam Edge. Fortunately there were two doctors with the gentleman, who had been descending the same path off the hill. Equally a paramedic from the North West Air Ambulance Service soon arrived on scene shortly after we arrived. The casualty had suffered a lower back injury and facial abrasions. He was given pain relief and then put in to a vacuum mattress (full body splint) before loading on to the stretcher. 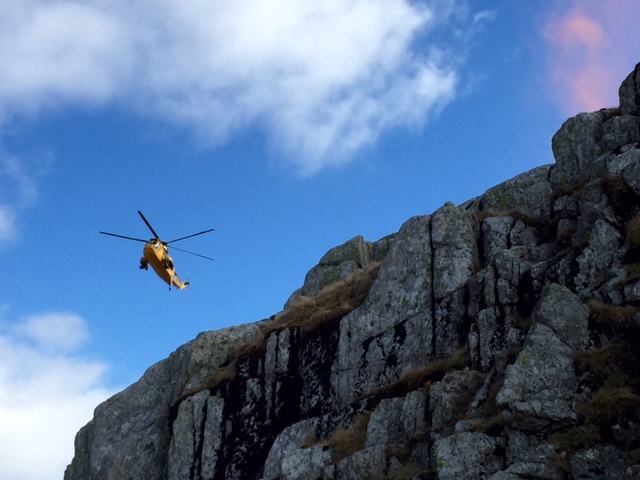 The RAF were able to once again assist with the evacuation and winched the gentleman in to their helicopter for his onward journey to  Cumberland Infirmary, Carlisle.