Incident 33 of 2020:-
04/09/2020, 14:57, Wetherlam NE ridge, NY290013
It seemed like lots of people had gone back to work/school, so the fells were quieter, but accidents still happen. On a cool and breezy afternoon, one of the members of a walking party slipped on the descent of Wetherlam’s north-east ridge, and sustained a serious ankle injury. We were called to help by Cumbria Police. Because that location has no tracks for our Land Rovers to get anywhere near, a very long and steep stretcher carry was likely, so we requested a helicopter and another team’s assistance. The casualty was assessed, pain relief given and his ankle injury reduced, and he was packaged in our stretcher for evacuation.
Fortunately, Coastguard helicopter Rescue 199 became available, and flew down from Prestwick to assist. The winchman was lowered to our casualty, and both were winched back into the hovering helicopter, which flew him to Cumberland Infirmary Carlisle hospital.
This incident involved 15 members, and a doctor from LAMRT, plus 12 members of Duddon and Furness MRT who turned out to help if a long stretcher evacuation had been required. The rescue took 4.5 hours. 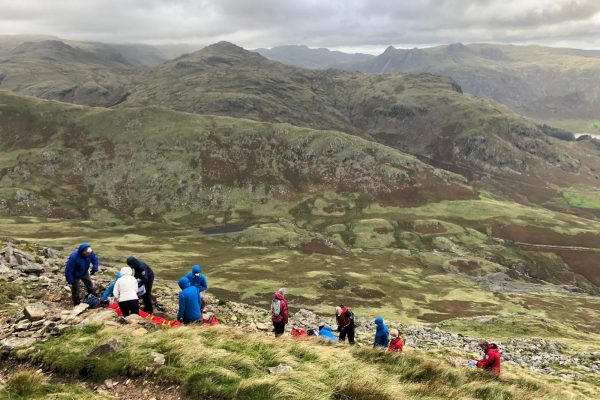