The weather was extremely wet and windy and the team had all ready been out attending a rescue near to the summit of Dow Crag.

Cumbria Police (CUMPOL) contacted the team for the second time, alerting us of another couple who had become lost near the summit of Wetherlam.

Initially it had been difficult to contact the party, so a full call out was initiated. More team members arrived at the base and were sent out to search various places on the upper fells. Team members who had already been out on the first rescue ascended the Old Man of Coniston from Goats Hawse.

A Sarloc Rescue text had been sent (a text message which provides us with a grid reference of where the party are) but had not yet given us a location for the lost couple.

Eventually the grid reference came through, which located the party near to the summit of Wetherlam.

Team members who were close to Swirl Hawse were tasked with carrying on to Wetherlam and descend Wetherlam Edge to locate the party, while other team members were driven round to Tilberthwaite to make their way onto the Fell.

Once located the couple were warmed with hot drinks and warm clothing. They were then escorted off the Fell back to the Land Rovers down in Tilberthwaite.

Duddon and Furness Mountain Rescue Team were also contacted for support though once the location came through they were stood down. 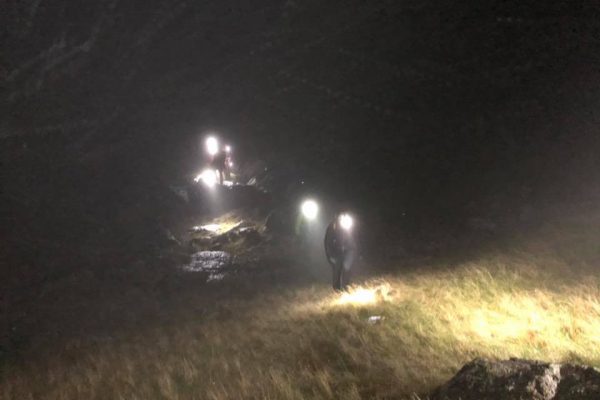