Another Glorious day in the Lake District with many people taking advantage of the weather and the Bank Holiday to get out into the forests and fells both on foot and on bikes.

The Team was contacted by North West Ambulance Service (NWAS) to attend an incident where a rider had fallen of his bike on the North Face Trail and was reported to be in Cardiac Arrest. A full Team Call Out was put into operation with the first crew being away quickly bearing in mind the urgency of the situation.

On our arrival the man had been resuscitated by passers by and was being attended to by staff from the North West Air Ambulance, which had sent two helicopters with advanced Paramedics and Doctors, supported by an NWAS land Ambulance crew. Because the man had fallen into a beck, a Cumbria Fire & Rescue crew was in attendance, supported by a Fire Officer.

Coniston MRT members assisted with carrying the casualty back to the track and provided willing hands to fetch and carry and hold things while the medical team continued to stabilise the casualty . As soon as the Doctors were happy the casualty was as stable as possible, Coniston MRT and Fire & Rescue personnel carried the casualty to one of the helicopters for the onward journey to the Royal Preston Hospital. 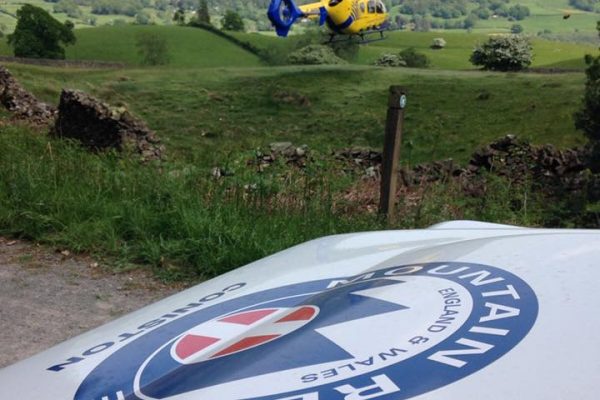